Following our successful Creating music through technology project funded by the Sobell Foundation in partnership with Decibels last month, Eloise Garland and I were invited back to The PACE Centre for more fun last week!

This time round, we were contracted to run six 90-minute sessions as part of Playaway, a non-profit charity which runs a two-week specialist holiday playscheme for disabled school-age children every summer.

Our brief was more flexible. We no longer had an obligation to work with the Subpac vest, and Playaway asked us to use their theme this year, which was Space. The sessions needed to be self-contained, as we were working with a different group every day. We took advantage of this by playing around with the layered structure of the workshops as we went along.

Otherwise, the aim remained the same: to explore emotions, personality traits and moods through music, and then feed the new appreciation into visual art.

Given the theme, Space Oddity was a natural choice for the visual art segment. It was released 50 years ago – in the same year as the first moon landings – and to make it even more special, there was even a cover from a real-life astronaut. It had a pleasant ambience that I believed the children would take to.

Again, I had to show them first how it would be done! In the photo below, I’m actually painting a tiny figure disappearing into the Milky Way while the video is playing. 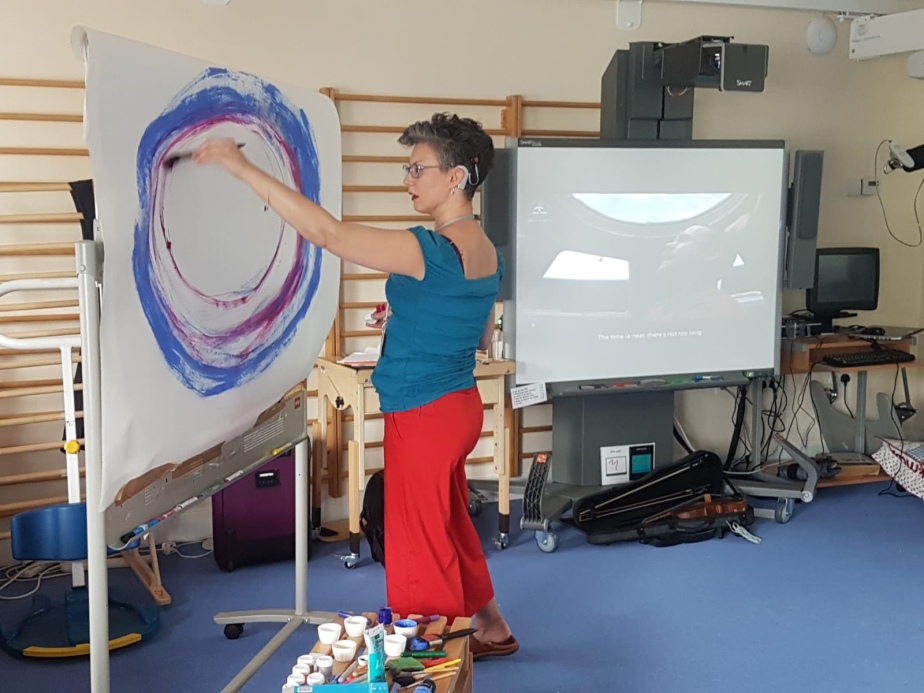 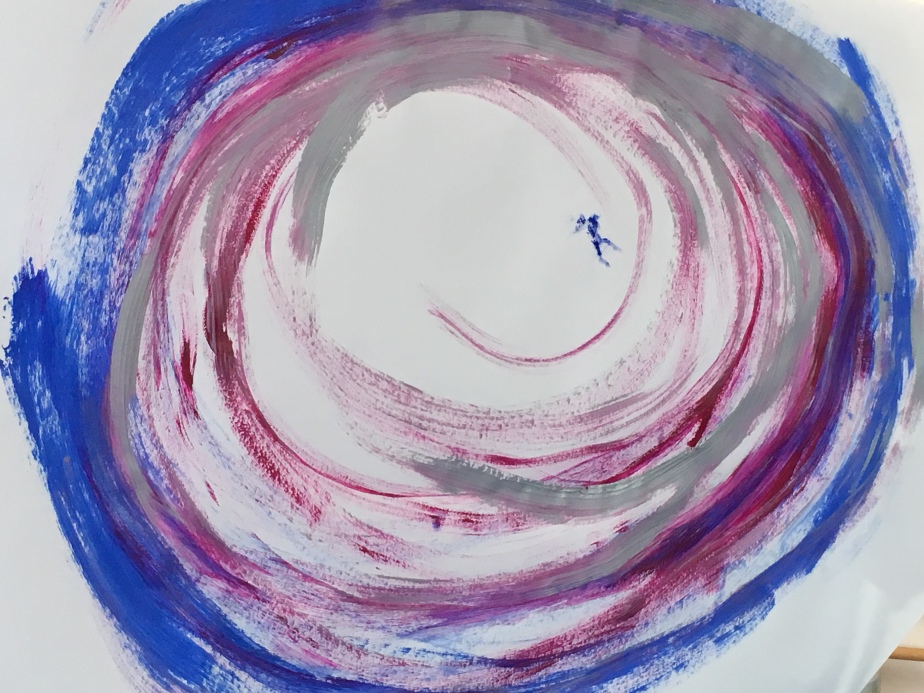 Because I knew the song quite well, I was able to disperse with the Subpac and properly get into my stride. In other sessions I’ve also painted a lone astronaut floating in space towards the Moon, and a metallic comet hurtling through the sky! 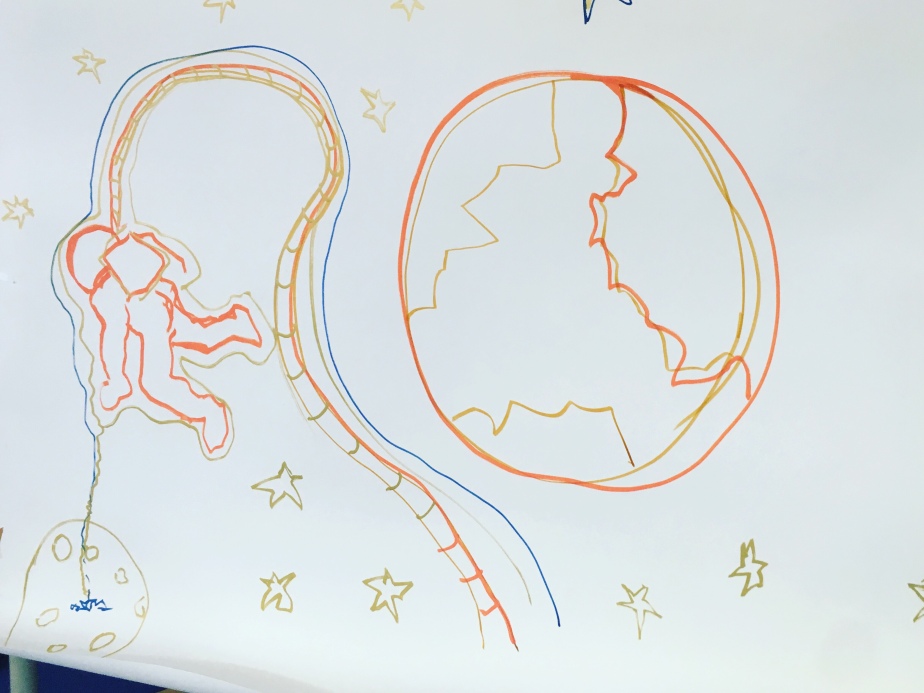 Next, the children discussed imagined characteristics of certain planets with Eloise – Mars, Jupiter, Neptune – and created short, basic compositions with various instruments based on each, led by Eloise on the violin.

Thus primed, the children were able to return to Space Oddity with a newly enlightened perspective and paint more imaginatively and freely while, again, Chris Hadfield did his acoustic guitar riff on the big screen. 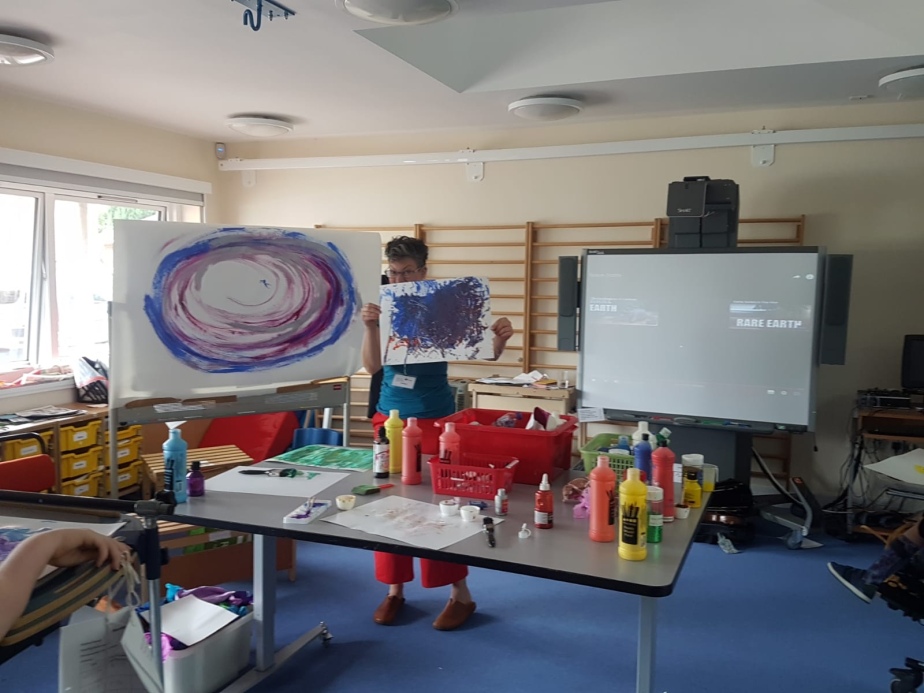 The results were astonishing in their variety and confidence! The children clearly showed an aptitude for independent thinking and for owning their feelings.

Sadly, I’m not able to join Eloise in the second week of Playaway due to a prior commitment. I’m certain though that my replacement, illustrator Tim Reedy, is more than capable of generating his own cosmic fun with the children – and I look forward to seeing them all again very soon.