Synopsis: A personal documentary by filmmaker and artist Melissa Mostyn, exploring the often taboo and unspoken grief felt by families when they find themselves with a Deaf child, and the impact that has on their offspring. Presented in British Sign Language (BSL) with some spoken parts.

Produced by Neath Films in association with the British Sign Language Broadcasting Trust (BSLBT) as part of Zoom Focus, an advanced Deaf film-making scheme, listen, even when your heart is crying is the first TV documentary and the second film I have ever directed. It explores parental grief from a Deaf perspective, and how that impacts on family relationships over the years. First broadcast on Film4 on 5th January 2015.

Praise for listen, even when your heart is crying:

‘I was confounded by your film. You handled a number of issues sensitively and intelligently. I also liked the way it was constructed’
‘Visually rich and colourful, as well as profound…I liked the bits where the subjects were viewed from behind frosted glass, like the way you feel when you’re dealing with raw grief. Sort of frozen and detached from the world’
‘A broadcast breakthrough’
‘A wonderful and refreshingly honest film. Thankyou for letting us in’
‘Absolutely spot on on all levels, beautifully filmed…the shining stars were, needless to say, the children’

The following documentaries, clips and promotions were part of a marketing strategy that I devised for Salon, the grant-funded deaf-led visual arts organisation that I founded and directed as an arts project manager, as a means of reaching out to the Deaf Community. At this time both Salon and the conceptual deaf art ideology that it promoted were brand-new and few people understood what we were all about, so these films were crucial to its branding.

Naturally, as a commissioning producer working closely with film directors such as Samuel Dore my involvement in the production of the Salon documentaries was very much hands-on, and for that reason they are included here as part of my film repertoire.

A short promo of Salon and its vision and values. Funded by Arts Council England and the Esmee Fairbairn Foundation. 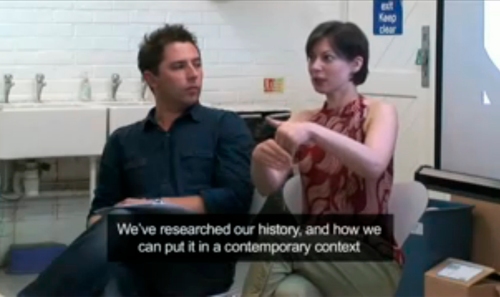 A short profile of the sound sculptor Colin Redwood complied from footage of a workshop he led at Modern Art Oxford, designed to act as a ‘visual CV.’ Funded by Arts Council England and the Esmee Fairbairn Foundation.

This documentary tracked the progress of five deaf visual artists at work in King’s Wood, Kent over a period of one week, as they worked to develop 2D and 3D pieces using the forest’s own natural resources. Critically acclaimed upon its first big-screen premieres in Wolverhampton and Rochester, USA – both in 2007 – the film is no longer available on DVD. Funded by Arts Council England and the Esmee Fairbairn Foundation.

An earlier documentary that followed Salon’s first ever retreat into the woods with seven deaf artists. Part of a pilot funded by Arts Council England.

This site uses Akismet to reduce spam. Learn how your comment data is processed.